My love, there's only you in my life
The only thing that's bright
My first love, you're every breath that I take
You're every step I make

And I, I want to share
All my love with you
No one else will do

Two hearts, two hearts that beat as one
Our lives have just begun
Forever, I'll hold you close in my arms
I can't resist your charms

'Cause you, you mean the world to me
Oh, I know, I know
I've found, I've found in you
My endless love

And yes, you'll be the only one
'Cause no one can deny
This love I have inside
And I'll give it all to you
My love, my love, my love
My endless love 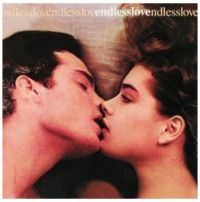 "Endless Love" is a song written by Lionel Richie and originally recorded as a duet between Richie and fellow soul singer Diana Ross. In this ballad, the singers declare their "endless love" for one another. It was covered by soul singer Luther Vandross with R&B singer Mariah Carey and also by country music singer Kenny Rogers. Billboard has named it the greatest song duet of all time.

Ross and Richie recorded the song for Motown, and it was used as the theme for the Franco Zeffirelli's film Endless Love starring Brooke Shields. Produced by Richie and arranged by Gene Page, it was released as a single from the film's soundtrack in 1981. While the film Endless Love was not a success, the song became the second biggest-selling single of the year (first was "Bette Davis Eyes" by Kim Carnes) in the U.S. and reached number 1 on the Hot 100, where it stayed for nine weeks from August 15 to October 10, 1981. It also topped the Billboard R&B chart and the Adult Contemporary chart, and reached number 7 in the UK.

The soulful composition became the biggest-selling single of Ross' career and her 18th career number-one single (including her work with The Supremes), while it was the first of several hits for Richie during the 1980s. Ross recorded a solo version of the song for her first RCA Records album, Why Do Fools Fall in Love, the duet version being her last hit on Motown. The song was nominated for an Academy Award for Best Original Song for Richie, and was the second song with which Ross was involved that was nominated for an Oscar. It also won a 1982 American Music Award for Favorite Pop/Rock Single.

The image is credited to amazon dot com